How To Help a Bleeding Dog 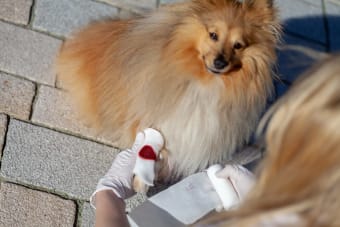 It can be very distressing to see your dog bleeding, and if their injury goes unaddressed and your dog loses too much blood, they can go into shock. Here, our Lithia Springs vets share the steps you should take when your dog starts bleeding, including how you can help stop the bleeding until you can see a veterinarian.

It can be scary to see your dog bleeding externally (visible bleeding outside of the wound) and in pain, but the bleeding you can't see can be more dangerous (Internal bleeding can't be seen from the outside). While all bleeding (especially in larger quantities) is cause for concern and should be addressed by your primary care veterinarian or emergency vet as quickly as possible, internal bleeding in the chest or abdomen can be deadly. Therefore, if your dog has been in an accident, injured, or/and is bleeding visibly, you should bring them to a vet so they can assess the severity of the wound and treat it accordingly, as well as check for additional damage such as internal bleeding and prevent or treat any infections developing in the wound.

What Can Happen When Dogs Bleed?

When a dog starts bleeding and loses too much blood over a short period of time, they can go into shock. The symptoms of shock can include increased heart rate, decreased blood pressure, rapid breathing, and pale, white gums. A dog can go into shock after losing as little as two teaspoons of blood per pound.

If your dog's shock isn't treated quickly, their organ systems will start to shut down. This can also result in permanent damage or death.

When dogs bleed, they are probably scared and in pain. As a result, they may react negatively to anyone around them (even those who are trying to help) by biting or scratching. In order to help protect yourself and those around you, you need to be careful and take certain precautions to avoid being bitten and help your pup. To prevent biting you might have to put a muzzle on your dog or have a friend or family member restrain your pooch as you provide first aid. Remember even the nicest dogs may start to bite when they are in pain.

How To Help Stop Your Dog's External Bleeding

While you can't stop internal bleeding on your own, you can implement first aid to help manage external bleeding until you can see your vet. Please be advised, that while first aid can be helpful for managing bleeding, it is not a replacement for veterinary care. If your dog is injured, you should bring them to your vet for an examination and treatment.

Here are the first aid steps you can take when your dog is bleeding:

If Your Dog Is Bleeding From The Paw

Is your dog bleeding from their foot? Wrap the wound in a clean towel or gauze and apply constant firm but gentle pressure for 10 to 15 minutes, to allow a blood clot to form. Minor wounds and scrapes will stop bleeding faster than deeper wounds. If your dog's bleeding doesn't stop after 10 to 15 minutes, bring your dog to the closest emergency vet. Also, if your dog walks on their paw the bleeding may start again.

However, if the wound is on the bottom of the paw pad, you will first need to check and see if there is any debris or items lodged in the wound. If you can easily grab the object with clean tweezers, you can gently remove it. If there is a lot of small debris such as gravel loosely embedded, you might be able to remove it by carefully swishing the paw in cool water or gently running water from the hose over the paw. If you can't easily remove the debris or items (or if it is lodged too deeply), leave it alone because you could cause more bleeding, pain, or make the injury worse.

Only a veterinarian can safely remove deeply lodged objects and debris. To make your dog more comfortable for the object's removal, your vet might sedate your pup.

If the source of your dog's bleeding is a broken nail, you will need to apply a silver nitrate stick, styptic pencil, or cauterizing powder to the nail (you can purchase them from most local pet stores). If you don't have any of these readily available, cover the nail in flour or baking soda. To help stop the bleeding, you may also stick the tip of their nail in a bar of soap. Then proceed to wrap your dog's foot in a towel or gauze as you bring them to the vet.

If Your Dog Is Bleeding From Their Leg

When dogs have wounds on their legs there is often a significant amount of bleeding, especially if an artery or major vein has been cut. Wrap the wound and apply firm pressure with a clean towel. If possible, elevate the leg above the heart. If the blood soaks through the towel, add another towel on top of it. Do not remove the towel, as this could dislodge the clots and make the bleeding worse. Immediately bring your dog to the closest emergency animal hospital.

If the wound looks to be minor, check the site for any foreign bodies. If the foreign items can be reached easily, you can carefully remove them. To remove smaller debris, flush the wound with clean cool water. Then cover the injury with a towel or gauze and take your pooch to the vet.

If Your Dog Is Bleeding From The Torso

It can be hard to hold a towel on a wound that is located on the abdomen wall, therefore you might have to tape it. You can do this by surrounding the towel with 3 or 4 strips of tape, circling the chest and abdomen. To prevent impaired breathing, make sure the tape isn't too tight. You should also use a bath towel for large dogs and a hand towel for small dogs.

If you hear sucking noises when your dog breaths, hold the towel firmly on the wound and take your pooch to an emergency vet immediately. Some injuries to the chest that affect the lungs can be fatal.

If your dog has an object protruding from an abdomen or chest wound, do not remove it. Wrap it carefully in a towel without disrupting the item, and go to your local emergency animal clinic as quickly as possible.

If Your Dog If Bleeding From Their ear

Ears have the tendency to bleed a lot because there are lots of blood vessels around the surface of the skin on the ear flaps. This bleeding becomes worse when dogs shake their heads.

To help manage the bleeding, hold a piece of gauze or a small face towel on both sides of the ear flap, then fold your pup's ear over the top of their head, and hold it firmly in place. To help hold the gauze or towel in place, you can wrap a piece of tape around the top of your dog’s head and under their neck. But you need to be careful that you don't restrict breathing, do this by making sure you can place 2 fingers between your dog’s neck and the bandage.

If your dog is bleeding or has been in an accident, contact our emergency vets in Lithia Springs as quickly as possible for after-hours urgent care. Our team at Westside Animal Emergency Clinic is available weekday evenings, overnight, weekends, and on major holidays to provide your pup with quality emergency care when they need it most.